Muhammad bin Abdul Wahhab is one of Muslims group leader who promoted the takfir concept as an important part in his religious thought. This article explains his methodology of takfir and its legal implications, then examined critically by using mas}lah}ah perpective. This study of the works of Muhammad ibn Abdul Wahhab concludes: First, the methodology of takfir Muhammad bin Abdul Wahhab can be seen through understanding his principle thoughts about Ibadah (worship) and Islam, and also various rules that must be known and implemented related to when takfir can be implemented, such as the terms and barriers of takfir, qiyam al-h}ujjah dan masa’il zahirah dan masa’il khafiyyah. Second, considering the legal implications of takfir, then at that time his concept doesn’t fully lead to mas}lah}ah ‘a>mmah primarily related to the variety of methods of understanding religion (al-Qur’an and al-Sunnah).

This work is licensed under a Creative Commons Attribution-ShareAlike 4.0 International License. 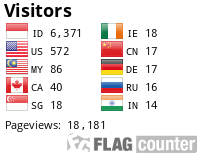